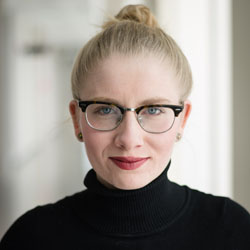 Catharine Bowman is a medical researcher, public speaker, and healthcare advocate with a profound interest in utilizing innovative thinking to approach societal healthcare challenges. In 2008, Catharine’s mother was diagnosed with stage-three metastatic cancer. Following two major surgeries, Catharine’s mother developed lymphedema, an incurable and lifelong disease affecting the lymphatic system.  At the age of 14, Catharine set out to create the first pharmacological treatment for lymphedema.

In 2015, Catharine initiated a speaking campaign called “Let’s Talk Lymphedema”, a talk series focused upon education, awareness, and advocacy for under-recognized medical conditions that pose a threat to the health of global populations. Since then, Catharine has had the opportunity to speak across North America and the UK about lymphedema and related health issues. Catharine is a Board Director for the Alberta Lymphedema Association, founder of Alberta’s “Lymphedema Nights”, and an active advocate at the provincial government level to improve lymphedema care and cancer rehabilitation programs within Ontario and Alberta.

While residing in Calgary Catharine continues to mentor BASEF projects in preparation for IISEF and CWSF competitions.