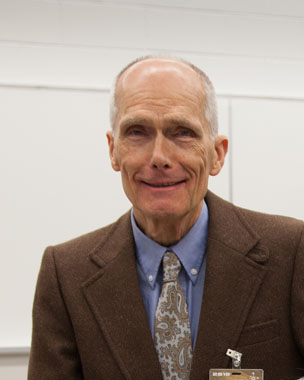 At the launch of the BASEF Alumni Network, we are delighted to announce Mike Jefferson as our first member. Mike was a participant in our first-ever fair in 1961 and he volunteers in the fair today, 59 years later. Mike epitomizes what it means to be an active alumnus of the fair. He participated with a project as a student and went on to have a long career but never forgot his BASEF past. His later work was even inspired by his original science fair project. He has now returned to us as a volunteer, facilitated the donation of a Special Award to the fair (Hamilton Amateur Astronomers) and presented it several times.

Here is his story. Be inspired!

My association with BASEF began at the first fair, in 1961.  That would be the year I was in Grade 10. But, let’s go back even further. I was born in Hamilton in 1945, spent my first year of life in England when my father, who had served in the RAF, was demobilized from Ferry Command and we returned to Canada. When I was in Grade 6 (in Ancaster in 1956) the American Space Programme and its rivalry with the Soviet Union were just emerging. There was a space venture in my future. Bell Telephone had just come out with a series of science programmes and Disney had completed the first of his programmes on “Rockets and Space” – “Man in Space”.  Within the next two years, “Man and the Moon”, “Mars and Beyond” and other science programmes were to appear for our eager young eyes and minds.

My friends and I formed a space and astronomy club under the watchful eye of our much-loved Grade 6 teacher, Mr. Clarke, a Welshman.  He was always asking how our rocket experiments were coming along as we desperately tried to invent fuels to get craft off the ground. We used everything from catapults to Jet-X’s to black powder (which we successfully manufactured from substances available (then!) at the local drug stores) and we succeeded with some minor launches, failing to injure or blow ourselves up. (Today, I have Estes rockets – far safer – which I intend to set off as soon as I can find some time to do it). One of us was lucky enough to be given a 40 mm Unitron-Polarex refractor for his birthday. My parents gave me a good student microscope for Christmas. I believe the thinking was that I would get more use out of that than a weather-dependent telescope. We wrote letters to Wernher von Braun, and his assistants would write back to us. If you have ever seen “October Sky”, aka, “The Rocket Boys”, that was us. People in those times were very much impressed with science and its findings. They believed in the experts and were not inclined to look upon new discoveries as “fake news” or utter other such put-downs of the experts. If something was appearing on television that pertained to school curricula, teachers would ask students who had a television set if it would be possible for a child without one to come over to their place and watch the programme with them. Such was the case with Bell Telephone’s “Hemo the Magnificent” and some of its other presentations. Everyone came to school ready to discuss the theme.  Everything went along like this in my Grade 7 and 8 years.

Then, I was in high school.  There was still enough of the above in us that classmates would write poems about us in the yearbook:

We were never labelled “space cadets” or anything like that. Things looked good for us in Grade 10.  We were very fortunate to have Mr. Park (a science teacher) offer to start a science club in 1960.  We started a project to create an astronomical telescope.  This instrument was to be ready for the BASEF of 1961.  However, it was not!   We ordered the materials too late and did not have enough man-hours available to get the main mirror beyond rough grinding. We did enter it as an incomplete project. And we did garner an honourable mention!

The most memorable things about the fair were the noisy ‘acoustics’ in the Hamilton Armouries, where it was held, and the giant Van de Graaff generator (it was about six feet tall) entered by Cathedral Boys High School. Safety was not much of a consideration in those days!  When they turned that thing on, it was as if the Saturn 5 was lifting off for the Moon!  They formed a human pyramid with the football team on the bottom (floor), the cheerleaders on top of them, and the ‘brains’ behind the project at the apex.  He clutched at 48” fluorescent bulb in one hand and touched the generator’s 3’ diameter ball with the other!  The bulb lit up!  What a demonstration! I don’t know how well they did – mostly show and not much science – but they broke all modern safety rules and records!  Today, it would have to sit there silent and unplugged.

As the next years of high school passed, I became immersed in assignments, homework, tests, exams and studying.  There was not much room left for science pursuits of any kind and it faded from my life quite considerably.

After my university BA and my year at Hamilton Teachers’ College, my elementary teaching career led me ‘back to’ science fairs. These were mostly within the school and/or board settings.  The county science fairs were simply on-the-spot bridge-building contests between teams of students, over in less than one day. Then, as now, the rigidity of the school curriculum made it very difficult for students to participate in science fairs in addition to their mandatory school work. It is nice today to see so many students benefiting from the wonderful learning experience at BASEF, working independently, or with professional people, parents or laboratories.  You just can’t keep a self-starter down!

About the early 1980’s my interest in space re-surfaced and I joined the Royal Astronomical Society of Canada Hamilton Centre.  It was like being reborn!  I ended up acquiring astronomical equipment and I helped found the Hamilton Amateur Astronomers (which has quite a close connection with BASEF).  About 2002 I became very interested in the ‘puzzle’ of spectra (of stars, the sun and planets).  I wanted to know how these revealed information about objects in the sky, about absorption lines, emission lines, grotrian diagrams, stellar classifications, etc.  So, today, I not only enjoy the sky, I also analyze the light that it shines down on us.

Somewhere close to my retirement from teaching, in 1999, I decided to get involved with BASEF again and I have served on the committee as a Merit Judge, a Special Awards Judge (with the Hamilton Association for the Advancement of Literature, Science and Art {The Da Vinci Award}), as an advisor with the Hamilton Amateur Astronomers and a BASEF Safety Instructor and Safety Officer.  It has been a great experience and I have loved every minute of my participation in it.  I think my life and its charmed childhood, prove beyond any doubt that you don’t have to be a professional scientist to enjoy science and nature!

The Hitchhiker’s Guide to the 20th Century

For those of you not old enough to remember the 20th century we’ve included some reference material.

Grotrian diagrams show the allowed electronic transitions between the energy levels of atoms. They take into account the specific selection rules related to changes in angular momentum of the electron.

Hemo the Magnificent was a one-hour made-for-television educational film, released in 1957 by Bell Laboratories. It details the workings of the circulatory system. Bell Telephone created 9 science specials for prime time network television, from the late 1950s to the mid-1960s.

October Sky is a movie based on Homer Hickam, Jr.’s autobiography “Rocket Boys,” in which he recounts his struggles to escape the small mining town where he was born. He went on to become a NASA engineer.

Saturn 5 The most powerful rocket ever launched. The Russian heavy lift N1 would have had greater lift but was never successfully launched. Possibly by 2021 NASA’s Space Launch System (SLS) or the SpaceX Big Falcon will set a new record after 44 years.

Space Race After the second world war the Americans and Russians were constantly competing. This lead to the arms race, the space race, etc. On July 31, 1956 the United States announced their intention to launch an artificial satellite. The Soviet Union announced its intention August 2, 1956.
On October 4, 1957, the Soviet Union launches Sputnik 1.
The United States launched Explorer I on January 31, 1958.

Canada became the third country to launch a satellite into earth orbit with Alouette 1 on September 29, 1962. We hoped it would work, designed it to last a year and were amazed that it’s mission lasted 10 years.

Television (TV) was just becoming commonplace in the 1950s. Although developed in the 1920’s, TV didn’t become popular until prices came down, wages went up, quality and usability improved, and programming became available. Hamilton’s CHCH, the oldest privately owned television station in the Hamilton-Toronto area, signed on the air on June 7, 1954, as an affiliate of the Canadian Broadcasting Corporation (CBC). At the time, all privately owned television stations in Canada were required to be CBC affiliates

Wernher von Braun (March 23, 1912 – June 16, 1977) was an aerospace engineer and space architect. He was the leading figure in the development of rocket technology in Germany and a pioneer of rocket and space technology in the United States. In 1960, his group was assimilated into NASA, where he served as director of the Marshall Space Flight Center. Among his many accomplishments were: